There should be a way to impose certain limitations in areas of the code that require licensing. This document researches an approach to achieve it.

Make use of overloading Open Policy Agent’s input along with an external storage source (instead of an OPA service) in conjunction with go-micro’s gRPC client wrappers (a.k.a middlewares) to leverage policy rules evaluation.

New terms are defined to refer to new mental models:

This proof of concept is very rigid in the sense that the IStorage interface only has one implementation that ties it to etcd, meaning running an oCIS cluster without an etcd service will result in a crash. This is by far ideal and less coupled implementations should be done. There is the case of using the storage metadata as a source to store data necessary to the policies, or even using the go-micro store as a kv store to achieve the exact same, since it already runs as its own service. The implementation of this is trivial and left out of the POC since it requires more time than the allotted for this task.

This problem perfectly encompasses the use of a message broker, where services such as OCS will emit messages to a bus and only listeners react to them. In this case the following applies: 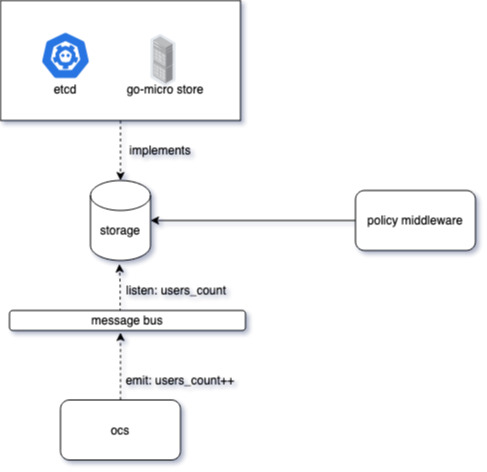 The necessary interfaces are provided to us by go-micro, only implementations are to be done.